THE SOVEREIGN ORDER BENE MERENTI
In this fast moving world it is increasingly difficult to help people properly, or to preserve our heritage for future generations.

The Order was established in 1932 under the name “Community Order BENE MERENTI.”

Due to the political and social disorder in the 30s the founders of the Princely House of Hohenzollern agreed to cancel the Order again, but Order Decorations were nevertheless conferred at Germany until the year 1941.

In 1950, His Highness Emanuel Joseph Prince of Hohenzollern-Emden gave the Order new, modern Statutes and decided by end of the 80s to establish the Grand Chancellery in the Republic of Austria. In 1998, the succession of the Order was governed by a Preamble.

The purpose of the “SOVEREIGN ORDER BENE MERENTI” is to support projects in the humanitarian and charitable field.

In each state a representative office, so called Consulate, should be established. Those individual, dependent Consulates are led by one of our Chancellor’s. The duties are under command and subject to our Grand Chancellor. The Grand Chancellor adds the further task of purpose and responsibility set out in Article 7, as far as the relevant Consulate is concerned. The Consulate are registered in the respective states, where this is required by its domestic law. The registration as a joint-stock company is not allowed.

The ORDER BENE MERENTI was founded by Our House of Hohenzollern-Emden in 1932 and it should be against the case that a stranger, third person, institution, etc., has illegally made use of the name, the insignia, etc. of Our Order or get hold of it or will, it is Our explicit desire to prevent this by all means, if there is no Grand Master`s own hand or signed authorization exemption exists.

As a top priority, is the accession of the “Recognition of the Order under International Law” in one of the following countries: Germany, Austria, Hungary, Romania, Poland, Kaliningrad, Lithuania and Latvia. This is be determined that by the parliamentary act, the current Grand Master will become the Sovereign Head of the Order. To this purpose, the Grand Master has the permission to transfer the installed seat (residence) of the Order.

As a further premise, is the accession of the “Allowance to wear Order`s Decorations to the Uniform (military)” of the state, in which the Order is established.

The title of nobility “Prince” is exclusively reserved to the function as Grand Master, if he is not already bearer of this honor. “We (the Prince)” do not want a generalization of this titling.

The approval of all types of applications is subject to Grand Master`s responsibility only.

We, Emanuel Joseph, by mercy of God, Prince of Hohenzollern-Emden, have let Us found after the establishment of our Order Community “BENE MERENTI” to execute provisions and We therefore determine that the ORDER BENE MERENTI should worn solely as an accolade of the Order Community.

The Order of Merit consists of the following Grades:

Special Class Grade I:    Grand Commander Cross with Emeralds on the Collar    G.C.C./EMD/OMB

The Order consists of a white cross with four rays and avers black outer brink. In the middle is the inscription “BENE MERENTI” surrounded by a green laurel wreath. At the reverse there are the initials of the respective Grand Master with sublime crown on a white ground with black border. The Order is dominated by a five stirrup shaped crown. The ribbon of the Order is white with three black stripes.

Special Class Grade I:     Grand Commander Cross with Emeralds on the Collar      G.C.C./EMD/OMB

For extraordinary cases, We reserve Our rights, to confer personally higher decorated grades of Our ORDER BENE MERENTI. We (the Prince) do not want a generalization of this conferment.

The conferment of our Order will be made by Our free motivation, recognizing the services being done.

All Order (decorations) and Medals may be retained in the family after the death of the wearer. In conferring the decedent with a higher grade, the lower existing decoration must be returned tax-free.

If contrary to all expectations, one case revealed that the proprietor of an Order has done undignified behavior he could be guilty, We will consider as Our duty to withdraw the honor of the Order and its sign from that person.

Our plenipotentiary is obliged to establish a Special Order Chancellery, which acquires the conferment of the Order and its sign.

According to our demise as Grand Master it is our express desire that the current Grand Chancellor of the ORDER BENE MERENTI shall maintain the leadership as interregnum. It is not in Our will to hand over the Order to our son and it is obliged to our Grand Chancellor only to change that direction and by voting (electing) a new Grand Master only persons who are of noble descent and noble birth, could be elected and excludes any natural person.

We have approved the current statutes and let in print them under the seal of the Princely House of Hohenzollern-Emden. 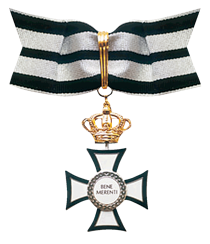 The indication of the names do not follow the Order Degrees (1st Grade • 2nd Grade • 3rd Grade), but following its ennobling date of the Order Ceremony.

About the ORDER BENE MERENTI of the Princely House of Hohenzollern is not much to find out in literature. The files location is exiguous because under HH Prince Frederick matters regarding the Order had not nearly been carefully archived as before and furthermore regulatory and public affairs concerning the implementation of the Order, never was put down in writing, therefore the handling of the documents concerning historical evolution of the Order is not sufficient.

Caused by the general economic, political and social disorder in Germany HH Prince Frederick of Hohenzollern felt in summer 1932 to initiate the establishment of an Order Community which should be guided as an Order who follows similar charitable goals like the Sovereign Military Order of Malta – Hospitaller Order of Saint John of Jerusalem of Rhodes and of Malta. After having decided “Constitution, Statutes and Grades of Decorations”, the Order was founded on August 9, 1932 by four founding members, under the name “Community Order BENE MERENTI “. In order to be fully protected by the current domestic law, respective documents were sent to the Ministry of Interior for approval, which obviously were adopted by silent procedure without any objection.

Despite this official safety declaration HH Prince Frederick soon get insight that a political and social appropriateness for the incorporation of the Order was not given and therefore in January 1933 the four founding members declared by signature the formation of the Order as suspended. By that way the formation came to an end before it had ever entered into force, also as the declaration being an Order had only exists among the intimacy of the founding members and had never developed any effective presence external.

However, we should take attention to the grades and the planned decorations of this ephemeral Order because it should become a significance for the future evolution of the Order:

We, Frederick, by mercy of God, Prince of Hohenzollern, Burgrave to Nuremberg, Count of Sigmaringen, Veringen and Bergh, Master of Haigerloch and Werstein, have let Us found after the establishment of our Order “BENE MERENTI” to proclaim the following provisions:

Under Our participation the Order Community „BENE MERENTI“ had been founded on August 9, 1932.

We declare, that the Order “BENE MERENTI” should worn solely as an accolade of the below mentioned members of the Order Community.

The Order consists of the following Grades:

This Order of Knights follows the badges for female members, namely:

The cross consists of a white cross with black boundary. In the middle stands the inscription “BENE MERENTI”, surrounded by a green enamel wreath. On the back are our initials – three intertwined F with a crown, – on a white field with black border. The ribbon is silver with 3 black stripes – analogous to the Our Princely House Order.

The Ladies of the Order Community shall wear:

Done, at Our Residence of Sigmaringen August 10, 1932 (L.s.) Frederick   Even although this Order does not have got out instead of very narrow circle, the original decoration of a Knight of Justice is right known.

The cross on the collar is silver plated; the front white enameled with black edges, the white medal in the middle with the inscription: „BENE MERENTI“ in a green laurel wreath. The back is white enameled and in the middle of the medal there is a reflecting „F“ monogram on a white background surrounded in a black ring. In the each of the cross-angles there are three golden rays.

The ORDER BENE MERENTI did not certainly exist anymore in its provided form, but its name and the decorations were still kept by HH Prince Frederick and added it to the Princely Order of Hohenzollern as a new classification grade. It cannot be evaluated at what time that was happened. Only the often mentioned listing of the Order, medals and decorations of the Princely House of Hohenzollern from around 1935, named the first time the current classification of the Order.

The formal adoption of the class descriptions based on the scheme of Hospitaller Order of Saint John of Jerusalem of Rhodes and of Malta has been changed to a modern neutral numbering which also took into account a strengthening of the hierarchy by omitting the former class of Knights of Justice.

In this form the Order BENE MERENTI was incorporated from Romania into the Royal Romanian Order by Decree of King Carol 2nd of Romania, dated December 16, 1935.

The Order was awarded in four grades for men and three grades for women. By decree of March 8, 1940 the ORDER BENE MERENTI was converted by the reigning House of Romania in the newly simultaneously instituted “Order of St. George`s”. The ORDER BENE MERENTI ceased to exist, the already conferred decorations but could still be worn further.

Since it is not easy to trace the evolution of this Order in its changing grades correctly, HH Emanuel Joseph Prince of Hohenzollern had decided 1951 to undertake a revision of the statutes.

The wearing styles of the Order and a reducing of classifications had been modulated in 1998 with respect to the „modern age“. The so called Grand Commander Cross (G.C.C.) is now as it was used to wear on the collar, at the special class grade I with emeralds (EMD). The Knight`s Cross (K.C.) was changed from the simple attach (pin) form into a star form. The ribbon remains in its original form (silver with 3 black stripes).